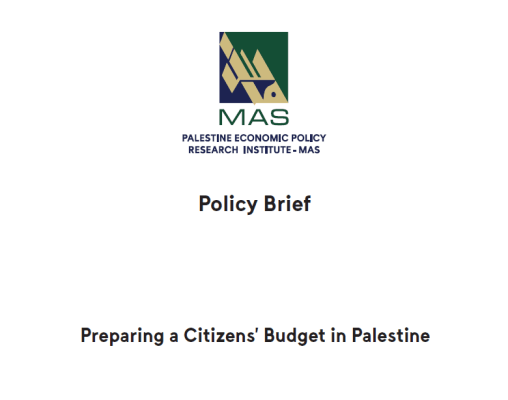 This policy brief paper was derived from a policy paper prepared by the Palestine Economic Policy Research Institute (MAS) for the benefit of the Ministry of Finance (MoF) as part of the Transparency, Evidence, and Accountability (TEA) Program, implemented by the United Nations Development Program (UNDP) and funded by the Foreign, Commonwealth & Development Office (FCDO).

A legislative vacuum currently exists in the Palestinian territories, primarily due to the fact that the Legislative Council ceased to function in 2007 as a result of divisions. This situation effectively means that there is a weakness (indeed, an almost complete absence) in participatory and societal oversight of the financial performance of the Palestinian National Authority (PNA). There is a need for a participatory formula in which both government and citizens converse (through civilsociety institutions concerned with dialogue, governance, oversight, and transparency) in order to guarantee citizens’ rights to know the sources of funding and spending for public money and to participate in formulating future spending directions and priorities, in association with relevant governmental and local authorities.

The importance of the “citizens’ budget” is based on the premise that it is one of the documents that should be published in conjunction with the announcement of the general budget (or the decision to adopt the general budget). It is a simple tool for educating citizens and raising their awareness on public revenues, expenditures, and sources of funding. It is also an important method for involving citizens in formulating spending priorities for the coming years. This applies to each of the various responsible agencies: central government and local authorities, in order to enhance citizens’  confidence in their work. Herein lies the purpose of this study: to highlight best practices adopted globally in the field of preparing citizens’ budgets compared to current practices in Palestine. The analysis presents a set of recommendations and policies that will help to develop and sustain a citizens’ budget, making it a participatory tool between citizens, governmental units and local authorities in preparing and formulating public policies and spending priorities that complement prevailing development needs.