Policy Brief Issue (7) - The Decision to Rise the Minimum Wage: Opportunities for Implementation 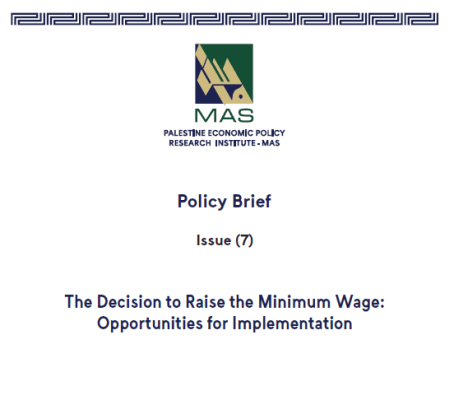 The new Resolution issued by the Palestinian Council of Ministers (No. 4 of 2021), which took effect early 2022, raised the minimum wage level across all Palestinian governorates up to NIS 1,880 per month (NIS 85 per day and NIS 10.5 per hour). This decision culminated rounds of negotiations between the Palestinian government and representatives of workers and employers. This decision sparked discussion about the timing of its passage, which came after the Coronavirus pandemic had wreaked havoc on the Palestinian economy, and its impact on the compliance capacity across various economic sectors. Added to those challenges are the difficulties associated with implementing the decision in the Gaza Strip, as it suffers from hard economic conditions caused by Palestinian divisions and the Israeli blockade of more than 15 years. Some also note that despite this decision, the number of workers who are paid less than the initial minimum wage (NIS 1,450 per month) is still high, especially among women. This raises questions about the feasibility of raising the minimum wage even further, and the ability of the Palestinian government to enforce compliance.