Background Paper, Round Table (3) - Resumption of US Aid to Palestine under the Biden Administration: Old Wine in Old Bottles? 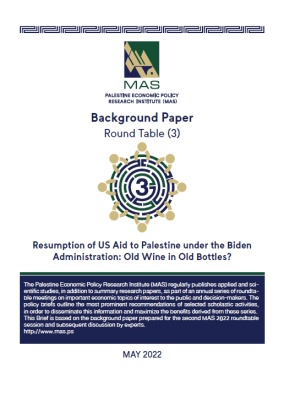 MAS has closely followed developments in the past five years related to the seismic shifts in the shape and policy determinants of United States aid to Palestine, especially compared to patterns established up to and including the Obama Administration. The end of longstanding US direct assistance to the Palestinian National Authority (PNA), under stringent anti-terrorism legislation (even for counterterrorism cooperation), was compounded by the Trump Administration’s termination of humanitarian and development aid to the Palestinian people under Israeli occupation, including to the UN agency responsible for the plight of millions of Palestine refugees (MAS 2019).

Adding insult to injury, the US floated in 2019 its infamous vision of “peace to prosperity” for the economic future of Palestine and the region. Inspired by a neo-liberal, neo-colonial political and economic view of Palestinians’ best interests designed in Tel Aviv, the “Deal” would have entailed naturalisation of the permanent Israeli occupation of Palestine and an end to the Palestinian people’s century old struggle for national self-determination (MAS 2020). This unprecedented twist in US policy ultimately floundered on rocks of stiff PLO rejection and its own innate flaws, not to mention the departure of its US and Israeli proponents from the political scene.

download attachment
share
Background Paper, Round Table (3) - Resumption of US Aid to Palestine under the Biden Administration: Old Wine in Old Bottles?