Prospects for Regulation of the Electronic Commerce Sector in Palestine (Summary) 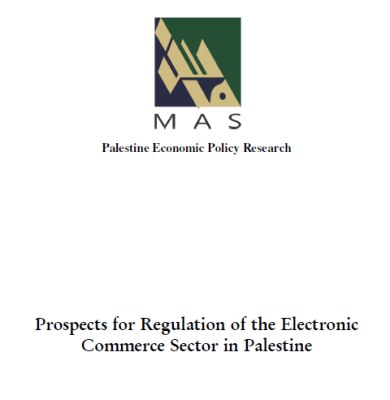 The volume of e-commerce has grown over the past two decades, bringing its total global value to $ 25.6 trillion in 2018 (equivalent to 30% of global GDP), according to estimates by the United Nations Conference on Trade and Development (UNCTAD), with a growth rate of 8% compared to 2017. This has created a major challenge for traditional tax systems based mainly on trade in physical goods that are easy to track. Governments in most countries face the double challenge of enhancing their tax revenues given the development of e-commerce; while simultaneously not impeding the growth of the electronic market and developments in the ICT sector and digital economy. Therefore, setting tax policies for e-commerce, in a way that achieves a balance between financial goals and economic benefits, is a key issue for both developed and developing countries alike.

In Palestine, the scope of electronic commerce has expanded in recent years, evidenced by the significant growth in postal parcels arriving from overseas via Palestine Post (more than 900,000 postal items in 2019, representing a growth of 44% relative to 2018). Moreover, data on the ICT sector in Palestine for 2019, issued by the Palestinian Central Bureau of Statistics (PCBS), reveals that 8.1% of individuals (18 years and over) in Palestine have purchased goods or services via the Internet. UNCTAD’s data indicates that the percentage of Internet shoppers (15 years and over) in Palestine was 8% of total Internet users in 2017, and 4% of the total population. E-commerce in Palestine has also witnessed a spurt in growth in recent months, due to the state of emergency and accompanying measures adopted by the Palestinian government at the beginning of March 2020 to limit movement, in order to restrict the spread of the corona virus across the Palestinian territories. This caused an increase in the number of electronic consumers who purchased goods/services through local/global electronic shoppingsites