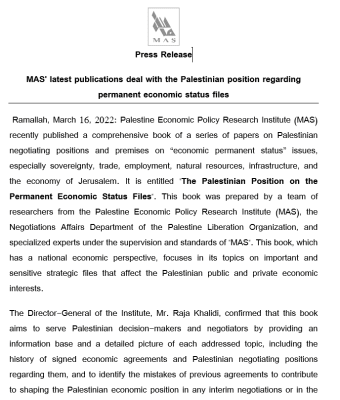 Ramallah, March 16, 2022: Palestine Economic Policy Research Institute (MAS) recently published a comprehensive book of a series of papers on Palestinian negotiating positions and premises on “economic permanent status” issues, especially sovereignty, trade, employment, natural resources, infrastructure, and the economy of Jerusalem. It is entitled "The Palestinian Position on the Permanent Economic Status Files". This book was prepared by a team of researchers from the Palestine Economic Policy Research Institute (MAS), the Negotiations Affairs Department of the Palestine Liberation Organization, and specialized experts under the supervision and standards of "MAS". This book, which has a national economic perspective, focuses in its topics on important and sensitive strategic files that affect the Palestinian public and private economic interests.

The Director-General of the Institute, Mr. Raja Khalidi, confirmed that this book aims to serve Palestinian decision-makers and negotiators by providing an information base and a detailed picture of each addressed topic, including the history of signed economic agreements and Palestinian negotiating positions regarding them, and to identify the mistakes of previous agreements to contribute to shaping the Palestinian economic position in any interim negotiations or in the event of initiating permanent status negotiations on the basis of the two-state solution. Therefore, all papers address in parallel the requirements of protecting the current Palestinian interest, as well as establishing the future in a way that serves Palestinian sovereignty and future expectations that serve sustainable economic development.

Khalidi stated that the institute held several focus groups with dozens of experts during 2020-2021 to discuss and review each paper of this book. He also stated that the book came out with a number of current and future recommendations.

This paper reviews the specifications and requirements for the embodiment of the sovereignty of the Palestinian state, and that the state of Palestine has all the internationally agreed conditions and specifications, in a legal and practical manner, that qualify it to extend its sovereignty over the occupied Palestinian territories after 1967 at the moment of ending its occupation.

It also reviews the international community support for building state institutions, as Palestine seeks to emphasize projects and investments in Palestine that embody national sovereign rights within the two-state solution. This especially important for those projects in vital and essential areas in the Gaza Strip and the West Bank, including East Jerusalem, as well as Area C that contain the natural resources necessary for the development of the Palestinian economy, as this entails embodying the elements and pillars of the sovereignty of the State of Palestine on the ground.

As for the reality of the occupation and its obstacles, the paper calls for any permanent status agreement to end the coercive economic dependence on Israel to achieve a strong Palestinian economy and restore the Palestinians’ rights, freedoms and ability to organize their internal and external affairs in a guaranteed manner, as is the case in all independent countries. Sovereignty under international law, requires that the international community play its role in enforcing and ensuring adherence towards that end.

The paper also addresses the principles of the two-state solution as regards embodying sovereignty. Hence, prioritizing needs based on the geographical and objective context of investment is necessary to achieve impact on development and growth, and these investment and policy efforts serve the vision of the State of Palestine in extending its sovereignty cumulatively.

This paper calls for a change in Palestinian policy orientations towards gradual disengagement, providing support for national production, encouragement of direct import and other policies. It also called for the necessity of amending the terms of the Paris Economic Agreement for the pre-final stage. As for the permanent status, the Palestinian economy must be liberated from the shackles of dependence and dependence on the Israeli economy. This opportunity may be available in the final solution negotiations.

Palestinian employment in the Israeli labor market: problems and principles of national demands

This paper calls for limiting excessive dependence on the Israeli labor market, whether in the current situation, or in the light of an independent and sovereign Palestinian state. From a purely economic point of view, it is possible that the influx of more workers into the Israeli economy will bring negative consequences on the Palestinian economy, regardless of the nature of the political solution. From an economic-political point of view, the excessive dependence on the Israeli labor market is a feature of the dependence on the Israeli economy that arose as a result of Israel's colonial policies. Therefore, the most important requirements for establishing an independent Palestinian economy lie in abandoning the path of dependency imposed by Israel, in which work in Israel was a cornerstone. Any future arrangement for this file must also guarantee joint control over the movement and volume of labor regardless of the size of labor in Israel.

The Palestinian agricultural sector and the impact of the Israeli annexation plan on it, focusing on the Jordan Valley

This paper has many recommendations; in the short term, it calls for increasing the budget allocated to the agricultural sector, strengthening the resilience of farmers in Area C, protecting lands from Israeli confiscation, exempting agriculture and industries related to agriculture, providing grants to small farmers, reaching self-sufficiency in agricultural products, and better use of groundwater resources in Area C. As for the protection of the Jordan Valley, there is a need to attract people to live in the Jordan Valley by establishing vital projects, Increasing the number of palm trees, shifting towards profitable crops and crops with high financial returns, increasing the number of livestock and access to more water resources.

The paper recommends in the long run, enhancing the value-added and sustainable development of the agricultural sector through restructuring the sector towards industries related to agriculture, optimizing the use of public government lands and endowment lands in the Valley, in addition to establishing a national agricultural marketing company and an agricultural insurance company.

The findings of this paper indicate that the key to full Palestinian control over the natural, marine, terrestrial and shared natural resources is the prior recognition by Israel of the full sovereignty of the Palestinian state over these resources, and that future cooperation is based on all kinds of national rights, not on the basis of need.

Negotiation is not the art of discussion. Rather, it is the mechanisms for using strengths, the strength of political will, clarity of vision and consistent strategies, the ability to possess information even at the technical level, preparing competent teams for each topic, as well as expanding the front of allies, using international pressure tools, and adhering to international law and resolution of international legitimacy.

The conclusions of this paper showed that there are many recommendations that must be taken into account in one of the sectors of the current infrastructure. These include a number of demands that must be raised today even in the absence of a political or negotiating process, from the standpoint of human rights and legitimate livelihood, and to establish the most important elements of the infrastructure of a state of Palestine. The most important of these sectors are: energy and electricity, water rights, distribution and sewage networks, information and communication technology, transportation and solid waste.

Jerusalem, The capital of the Palestinian economy, between constants and variables

This paper explores the economic dimensions of making Jerusalem the capital of the State of Palestine, in support of any future negotiations and any current efforts to demand political and diplomatic protection of Palestinian rights in the city, including economic and social rights, until a permanent formula is reached for the relationship between two independent states with one city as their capital. In other words, this research requires linking between the Palestinian vision/demands for the permanent economic status, and those related to the location and administration of the city of Jerusalem as the political capital of the desired Palestinian state.

This paper first reviews the historical location of Jerusalem in the Palestinian economy, and the current status of the city, including the various challenges and variables that prevent the city’s advancement from all economic and social aspects, and how its forced separation from the rest of the occupied land threatens the city’s fusion within the economy of the State of Israel. The paper then reviews the legal perceptions and the various Palestinian demands regarding the city's future, and compares them with the economic formulas and models that can govern the relationship between the two states within the permanent status. Accordingly, the paper proposes the need to consider a number of policy and administrative requirements related to the city of Jerusalem as the capital of the State of Palestine and its national economy.

It should be noted that this proposition is based on the fact that the negotiating economic file of Jerusalem has fixed aspects related to Palestinian rights in the city on the one hand. On the other hand, it is necessary to deal with the consistent changes on the ground since 1967, and especially since 2001, which threaten to undermine any chance of realizing those rights. Thus, this paper seeks to restore some of Jerusalem’s historical position as the center of the Palestinian economy.