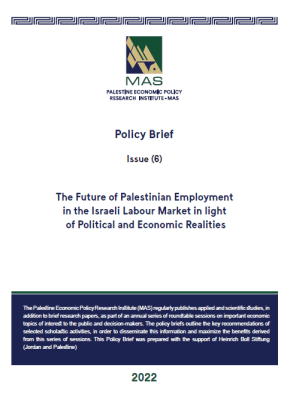 The number and proportion of Palestinian workers in Israel have seen a steady rise over the past decade. As the statistics of the Palestinian Central Bureau of Statistics (PCBS) show, their number increased from 78,000 by the end of 2010 (PCBS, 2011) to more than 173,400 in Q1 2022, in addition to 31,000 workers working in Israeli settlements (PCBS, 2022). The last five years have  witnessed the largest and fastest increase in these numbers; an increase that the Palestinian economy has not seen in the last two decades. Today, it even exceeds the total number recorded in 1999 of about 140,000 West Bankers and Gazan workers,  accounting for 22.9% of total Palestinian workers at that time (PCBS, 2000). While labor income in Israel accounted for 6% of  Palestinian Gross National Income (GNI) in 2011, reliance on this labor has increased in recent years to a percentage that has
not been seen since the establishment of the PNA (around USD 3bn).

Today, quarterly data from the PCBS show that workers’ compensations in Q1 were valued at USD 945.9m (16% of GNI). Based on PCBS forecasts, compensation from Israel is expected to reach about USD 3.4bn, and USD 3.8bn.

On December 18, 2016, the Netanyahu government issued Government Resolution No. 2174 entitled “Increasing the Employment of Palestinian Workers in Israel from the Judea and Samaria Area, Improving the Manner of Issuing Work Permits and Ensuring Fair Working Conditions for Palestinian Workers”. There have been dozens of government decisions during the last decade or
so pertaining to Palestinian workers, in addition to the ongoing deliberations in Knesset committees and within the various state agencies. However, it seems that this decision is a foundational base for a new era of Israeli labor policies regarding Palestinian workers, which can be summed in three pillars, as the title of the resolution itself signify:

These three pillars, outlined in resolution 2174, form the basis of the Israeli government’s policies towards Palestinian workers from 2016 until today. The resolution was built upon by a bundle of subsequent resolutions so that Israeli policies regarding Palestinian workers appear to have remained consistent under Resolution 2174 despite the change of Israeli governments since 2016. All of this was accompanied by systematic and aggressive Israeli propaganda, led by the Civil Administration and the so-called Coordinator of the Israeli Government’s activities in the territories (COGAT), which seeks to portray Israel as being  concerned about workers’ safety, rights, and ability to find employment,  4 presenting itself as a “true” sponsor of the PNA, as well as an alternative capable of responding to the needs of the people and the economy. However, it has always emphasized the  conditionality of Palestinians’ ability to enter and work in Israel to the need for continued calm and surrendering to occupation  control. It also continues to renege on any of the steps it might announce for any security-related justification, as recently  happened in the case of the permits in the Gaza Strip.