Summary - Prospects for Development in Palestine 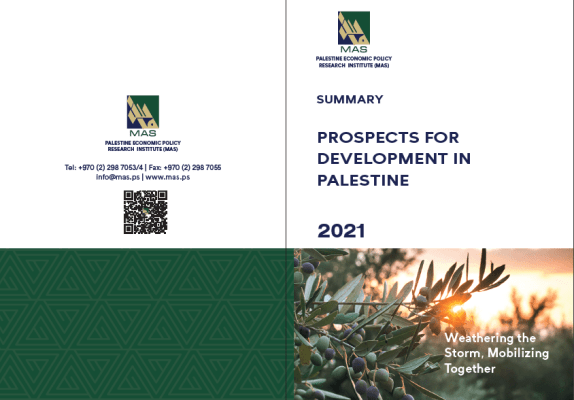 This is the first time that the “Palestine Development Prospects” Report, which takes a closer look at the developmental condition in Palestine is issued. It was prepared through a scholarly reading of the political, economic, and social results of the 25 years since the signing of the Oslo Accords, whilst analyzing its implications and the prospects for strengthening the chances of their achievement. The Report is the outcome of systematic thinking and dialogue among the research team (reflecting different disciplines, levels, and experiences), and their valuable contributions at different stages of drafting the report. This Report, therefore, reflects their findings, proposals, and objective vision, as a group of researchers who care about the future of development in Palestine,and does not necessarily reflect the positions of its publisher; the Palestine Economic Policy Research Institute (MAS), or that of the United Nations Development Programme (UNDP), which funded the preparation and publication.

As a starting point and as a statistical reference for the study of the development condition in Palestine, the first part of the report, which was drafted in 2021, tackles the changes that had taken place in Palestinian human development indicators between 2014 (when the last “Palestinian Human Development Report” was issued) and 2019 (the last year for which the indicators are available). More recent data and information were included based on availability (for 2020 and 2021). Yet, given the fact that these rigid indicators cannot reveal much about the unique Palestinian development dilemma, the Report includes in its second part an in-depth study of what the research team sees as key entry points to understanding the state of development (the storm) and the possibilities of reversing it through an updated development vision and determination (collectively).

Therefore, the Report addresses four themes consecutively: structural economic distortion, the effects of liberal
financialization, the difficult road to social development, and the Palestinian agency for governance. Since
studying the Palestinian economy is a matter of “political economy” par excellence, and “development” in the
second place, the socio-economic analysis of the report is framed in the context of an attempt to explore political scenarios that should have an impact on the prospects for achieving development and the role and duties of the international community therein.

No attempt is made in this Report to cover all aspects of the Palestinian development experience since 1994 or
since 2014 at the same level of details; the approach could only be selective and emphatic in terms of content
and level of in-depth analysis of the themes explored. This was due to the authors’ conviction that the topics selected are the most outstanding issues at the macro level, thus should be treated as prerequisites for the launch of a sustainable development process. On the other hand, the Report does not seek to assess the performanceof Palestinian economic policies during that extended period or the programmes of any particular governmentsince 1995. Rather, it focuses on what the current government has inherited and what will be borne by successive governments in confronting the challenges of the intractable development process. Even if differences were witnessed in some percentages or indicators from one year to another, the report confirms that the structural economic, social, and political problems will only be tackled by changing the political and economic balances to enable resolving the essence of the problem, embodied in the seeming permanence of the colonial regime and the denial of all Palestinian rights.

The final chapter of the Report presents a set of recommendations on the four core themes it addressed, draws some lessons from recent local and regional political changes, and reviews some alternative evidence-based interpretations and analyses of what international or official reports on the Palestinian development experience have presented. Yet, the intention was not to produce a “policy” document, but rather to come up with a conclusion of the joint analysis, drawing on some 200 Palestinian and international scientific and statistical references and sources, in the language of the authors themselves, with balance but without flattery. The purpose is ii
thus to encourage candid and constructive dialogue during such a difficult stage in the Palestinian development process and the history of the Palestinian people’s liberation movement from all forms of injustice. Needless to say, this Report is a commentary on an era in which many successive Palestinian Governments have handled the accumulated burden of development.

Just as the quote from Franz Fanon, chief anti-colonial theorist, suggests in the opening Quote of the Report, so do we as authors seek to convey a message which confirms that the Palestinian people do not resist the Israeli occupier for the mere reason that they love violence. It’s because they see themselves as holders of an inalienable cause of rights and justice (political, economic, and social), in spite of the era they are living in, where the law of the jungle and double standards are undeniably the dominating rules. Fanon’s statements also signal that the new Palestinian generation, which was raised amid the hopes and failures of the Oslo phase and the occupation’s harsh restrictions on sovereignty, development, and freedoms, and have become the first victimof non-development, will surely one day discover and decide its fate. They will build on the experiences and accomplishments, and learn from the mistakes, of the previous generation, those who have been fighting the hundred years war against settler colonialism.
The report thus brings the issue of Palestinian development back to its source, which is to engage in a legitimate struggle by the Palestinian people in accordance with international law, in order to exercise their right to self-determination in an independent State and to realize their rights and their deferred political, social and economic freedoms.