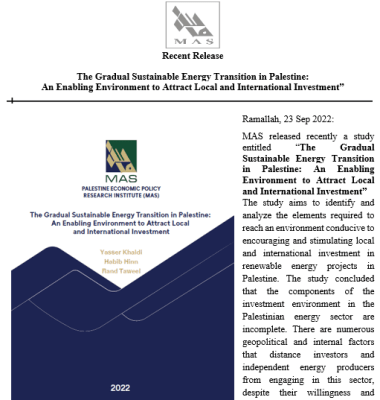 The study aims to identify and analyze the elements required to reach an environment conducive to encouraging and stimulating local and international investment in renewable energy projects in Palestine. The study concluded that the components of the investment environment in the Palestinian energy sector are incomplete. There are numerous geopolitical and internal factors that distance investors and independent energy producers from engaging in this sector, despite their willingness and financial capabilities.

The study also presented a set of recommendations for creating an enabling environment for the renewable energy sector: